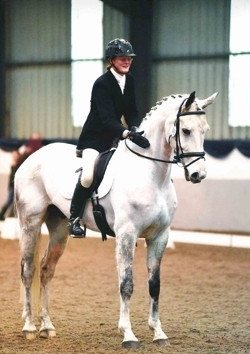 Caroline has over thirty years coaching experience, coaching dressage, showjumping and cross country.
Caroline holds the following qualifications; a BHSI Performance Coach and UKCC Level 3 in Eventing.
She is a BHS Accredited Professional Coach, a British Eventing Accredited Coach, a British Dressage Recognised Coach, a Pony Club Recommended Coach and a BHS/EQL Lead/Senior Assessor.
She has also a Degree in Business Studies, as well as holding Certificates in Further Education Teaching.

Caroline was awarded an ABRS Jeffress scholarship, for up and coming young instructors, which she used for further training with an international Showjumper.

As an experienced BHSI this allowed Caroline to herself become an Assessor for the BHS/EQL exam system.  Caroline is currently a Lead/Senior Assessor, assessing to Stage 4 and Intermediate Teaching.

Caroline has a long standing relationship with the Pony Club, having been a member many years ago. She is currently Chief Instructor for the Brocklesby Hunt Branch, but coaches for many of the local Branches. She is a Pony Club approved Recommended Coach as well as a Pony Club Assessor.

Competitively, Caroline's main focus has been Eventing, although she has competed successfully in both British Showjumping and British Dressage. Eventing, she has ridden at the higher levels at both national and international events, successfully eventing a number of home produced and often home bred horses. This passion for eventing led to Caroline becoming a British Eventing Accredited Coach. Following on from that Caroline decided to formalise this Accreditation by completing the Level 3 Eventing Specific UK Coaching Certificate (UKCC).  As a BE Coach Caroline has been one of the BE80 Training Coaches at the BE Brooksby Melton Horse Trials for several years now.

Carolines more recent competitive focus is British Dressage, qualifying for the BD Regionals Championships on a regular basis.  She has now become a BD Recognised Coach.  She is also a BD List 4 Judge, enjoying judging BE horse trials, Unaffiliated and PC dressage, as well as BD competitions.

More recently as a member of the BHS North Lincolnshire Committee, Caroline has become the BHS Education Officer for Lincolnshire.  This means Caroline is involved in running training events for the local area.  Monthly Polework clinics at Riseholme College are a regular feature.

In 2018/2019, Caroline was one of seven British Eventing Coaches accepted onto the National Development Programme for Coaching Excellence.  "The NDPCE is aimed at coaches working with adult and young people who participate in equestrian sport for competitive recreation motives. Coaches wanting to join this programme will be ambitious in improving their own performance and will already have success in getting more people participating in equestrian sport and retaining them in the sport by creating enjoyable coaching environments." 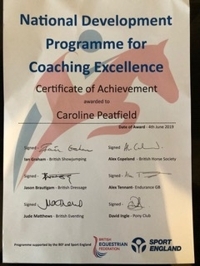 As a BHS/BE/BD/PC coach, Caroline at all times has full insurance and holds current certficates in First Aid and Safeguarding & Protecting Children.

Caroline continues to attend regular training sessions with top coaches and trainers around the country. This ensures an ongoing skill and knowledge development, which can be passed onto Caroline's clients.